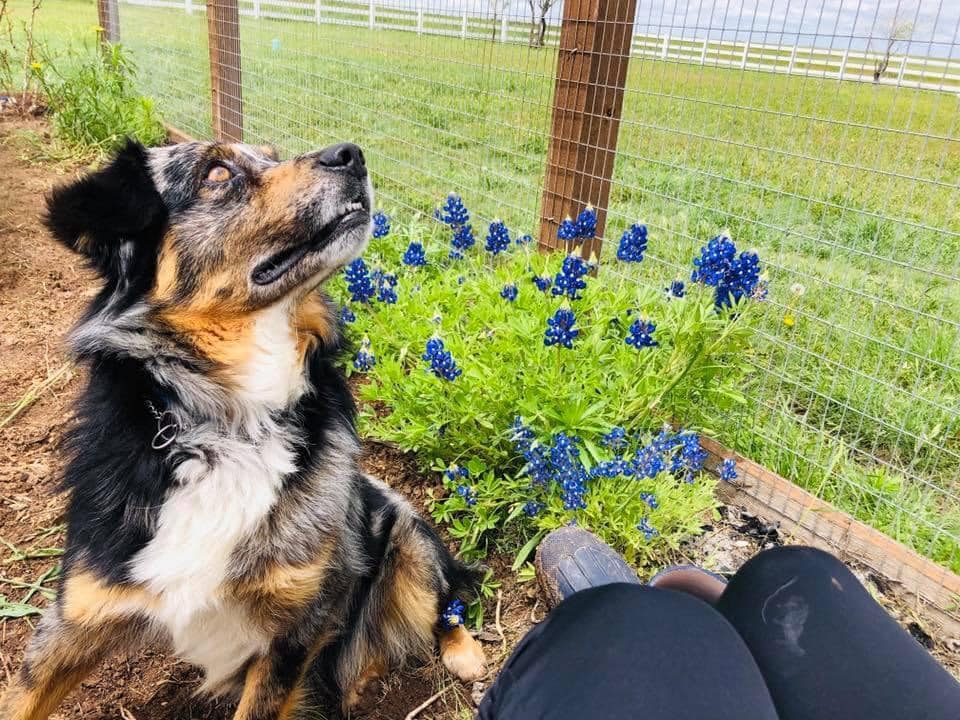 Here’s a history of my family’s dogs.

A collie named Lassie. My entire memory of her is that she lived long enough to become arthritic and was in a lot of pain. She laid in the shade of our house in a spearmint bed. When she died, my older sister cried.

I didn’t see this happen, but I later came to know that my dad had taken her into the field and shot her.

There were sundry other dogs scattered through childhood, dropped off in the country by people in town. Most did not survive well. They got into the chickens. They wandered too far into the field and were killed by coyotes.

One was a Jack Russell we named Skeeter. When she was young, she could leap onto a round bale of hay, which was at least as big as I was. She never left the yard and lived off our table scraps. Once a cat of ours had a litter of kittens, and was quickly dispatched by a barn owl. Skeeter came into milk and nursed the kittens. Damnedest thing.

A dropoff, half-blind, milk-eyed Shih-Tzu strolled up to our house at some point and knocked Skeeter up. If we named him, I don’t remember what it was. They had a batch of ugly, useless pups. He was ill-tempered and snapped at Skeeter, the pups, and just about everyone else. I was old enough at that point to be the one to take him out into the field.

The only dog my dad ever paid money for was a Border Collie we named Lass (I know). The $300 he paid the breeder seemed extravagant for our family in 1995. But she was a workdog and smart and had the kindest temperament. She would “herd” toddlers that visited by walking between them and the road, keeping them in the yard, but she could also cut cattle and pen the stupidest of all God’s creatures, our flock of turkeys that dad raised to butcher and sell every Thanksgiving. Never once did she set a tooth to one of those birds. She, the near descendant of wolves, nearer than most domesticated dogs, treated those birds more gently than I ever did.

One morning, dad walked out to check the livestock and Lass was bleeding all over the front porch, her skin laid open and the sheath of muscles along her rib cage exposed. She’d been lured out into the field that night by the yipping of coyotes, and she’d done what she was supposed to do: guard our interests. She’d managed to get away. She’d managed, somehow, to crawl up to the porch in the night, and lay there waiting for the sun to rise and dad to find her.

I’d never seen dad distraught over an animal. Even once when a cow was dying of bloat in the corral. He handled the crisis clinically. He cut a garden hose and shoved one end down the cow’s throat, hoping to reach the stomach that had trapped enough gas to cripple the cow. When that didn’t work, he marched into the house and grabbed the longest butcher knife he could find in the drawer. One must administer whatever help one is able to when an animal is on the brink of death. He kneeled beside the moaning cow, lifted the blade, and plunged it into her swollen side to relieve the pressure. It didn’t work. The next step was the .22.

But when he found Lass ripped open on the porch, he went to the coat closet, passed over the .22 which I’d seen him grab for any number of dogs, and instead picked a coat to wrap her in and rushed her to the vet. She survived for another eight or nine years.

Again, dad found her on the porch one morning unable to move in old age. He wrapped her in a coat again, and took her into the field and shot her. I didn’t see it, but eventually he told me that he’d cried for a whole day afterward.

My wife had a pair of Maltese lap dogs when we started dating 15 years ago. I wasn’t fond of either of them, but they came with the marriage, so I tolerated them. The male, Benji, died a few years ago. My wife came home and found him dead by the front door, waiting for her to get home. I made a coffin, and we buried him next to a crepe myrtle tree in our front yard. My kids cried and my wife cried off and on for three days. I did not, but I did read some words from the Book of Common Prayer as we buried him. The words did not seem to comfort my family in the moment, but reading them gave me something to do while they hugged.

His mate, Popcorn, had cancer last year, and a subsequent surgery to remove the tumor. A few days after the surgery, she was in bad shape. Barely breathing. Not eating or drinking. We took her to the emergency clinic to be “put down.” My wife and I and our three kids huddled around an examination table. The doctor explained what the process would look like. A hypodermic needle full of drugs I have no need to remember. It would take less than three seconds. We signed the paperwork. The doctor left the room to retrieve the syringe. My wife and kids cried. I did not. The doctor came back in. My wife, with a sudden resolve, said, “No, we’re not ready. We’re taking her home.”

About the time Benji died, and when my oldest son was eight–he’s eleven now– he asked for a dog of his own. We found an Australian Shepherd a few towns over, and all five of us drove over to pick him up. My son named him Blue. This is the first dog I’d ever bought. It’s my son’s, but I was going to be invested in this one.

I’d seen people squander good dogs, so my son and I took him to obedience lessons and trained him to walk beside us; allow us to walk through gates ahead of him; and we worked on fetch. The trainer said that Blue had clearly developed a bond with my son, and other than a fear he had of grown men, he is a sweet dog and has continued to be. This dog is also a common point between my son and me, a friend we could train together.

Life progresses though. My son developed other interests, and I went back to teaching, so I’m only home at the bookends of the day. We don’t play with Blue like we used to, but he’s always eager to play, sitting at the fence when we pull up; although, lately he’s been digging out and roaming.

Until yesterday when my son texted me as I was driving home from work. “There’s something wrong with Blue. We’re taking him to the vet.” The doctor didn’t offer much of a diagnosis; just a dose of antibiotics.

We let him sleep inside. When we got up this morning, he was dead.

The kids and my wife cried in the utility room. I read some words that were of no immediate comfort. I went to work before the sun rose.

I’m about to leave work now, and the sun will be setting and it will be 33 degrees with wind close to 40 mph when I get home.

I have to dig a God-damned grave.

I didn’t finish teaching Blue to fetch. He digs out because I never permanently fixed the fence. My son and I abandoned our own bonding over training this dog.

My wife and family know how to feel these things and offer comfort and weep. I’ve been mulling over sentences and verb tenses, constructing ways in which I’m supposed to feel. Maybe if I can say it clearly, I’ll know the emotion to perform, like stage direction in a play.

I have to buy a new shovel on the way home.