I pulled this sentence from McCarthy’s The Crossing for a couple of reasons. 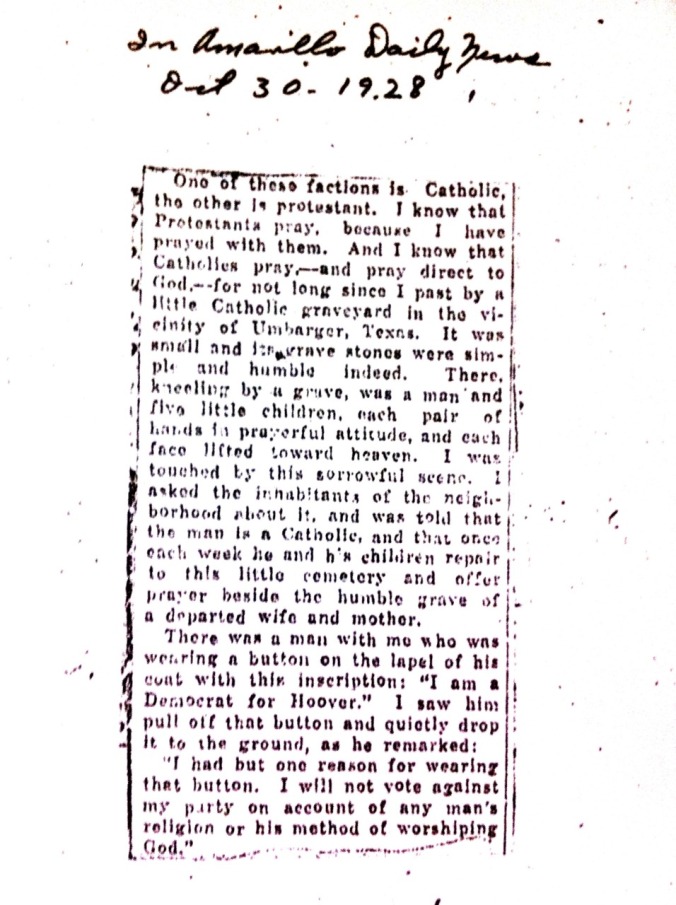 …One of these factions is Catholic, the other protestant. I know that Protestants pray, because I have prayed with them. And I know that Catholics pray, – and pray direct to God, – for not long since I passed by a little Catholic graveyard in the vicinity of Umbarger, Texas. It was small and its grave stones were simple and humble indeed. There, kneeling by a grave, was a man and five little children, each pair of hands in prayerful attitude, and each face lifted toward heaven. I was touched by this sorrowful scene. I asked the inhabitants of the neighborhood about it, and was told that the man is a Catholic, and that once each week he and his children repair to this little cemetery and offer prayer beside the humble grave of a departed wife and mother.

There was a man with me who was wearing a button on the lapel of his coat with this inscription: “I am a Democrat for Hoover.” I saw him pull off that button and quietly drop it to the ground, as he remarked:

“I had but one reason for wearing that button. I will not vote against my party on account of any man’s religion or his method of worshiping God."

The man praying by the grave was my great-grandfather, Paul Artho. The oldest of the five children in prayerful attitude was my grandmother. She was seven.

We found this newspaper clipping in my grandmother’s attic after her house burned down in February (the day before my second son was born). In that house that burned, she and I used to pray an "Our Father” over meals, and then I’d listen as she prayed for the souls of the faithful departed in their journeys through Purgatory.

I took this photo today at my folks’ place; it shows why the conquistadors and vaqueros called the town in which I live “Amarillo” which means yellow in Spanish. We’ve had less than half-an-inch of rain in 2011, and about two weeks worth of 100 degree days.

Romans 8:22 – For we know that the whole creation has been groaning together in the pains of childbirth until now.

“All human effort falls short of its intended potential, all human aspirations exist under judgement, and all human achievement is measured by the standards of the coming kingdom. In the present historical context, this means that Christians recognize that all social organizations exist as…

The Parody of Human Endeavor.

I’m convinced that bad art derives, like bad literary theory, from bad theology. To know God falsely is to write and paint and sculpt and cook and dance Him falsely. Perhaps it’s not poor artistic skill that yields bad Christian art, in other words, but poor Christianity…

…The worst Christian novels seem to forget Oswald Chambers’s insightful observation, which is that God promises deliverance in suffering, not deliverance from suffering. And so they lie about the world and about God and about the quiet, enduring faith of our brethren in anguish…

…Like pornography, sentimentality corrupts the sight and the soul, because it is passion unearned. Whether it is Xerxes weeping at the morality of his unknown minions assembled at the Hellespont, or me being tempted to well up as the protagonist in Facing the Giants grips his Bible and whimpers in a glen, the rightful rejoinder is the same: you didn’t earn this emotion…

This, finally, is what especially worries me, that bad Christian art is a problem of demand rather than supply. What if a reinvigorated Church were to embed genuine faith in the artist’s psyche and soul, such that he need no longer wear it on his sleeve, such that he bear to see and tell the world in its brokenness and beauty? Would Christian audiences embrace or despise the result?

These are some highlights from an entry titled “Bad Christian Art” by Tony Woodlief over at Image.

So noir exists as the fiction of moral breakdown, the fiction of corruption, and yes, the fiction of reprobation. To its practitioners, this also makes it realistic fiction, because it depicts the world—this side of Christ’s coming—as it truly is: not a realm of Newtonian regularity on the path to an ever brighter future, but a shattered, dystopian place only putting on a show of law and order.

The rest of the article is the best lesson I’ve read on the noir genre, and yes, I have researched this before.