Something I started, but haven’t been able to finish:

America reclines in the shadows
Stoking coals to keep off oncoming night
Oh, but a few more hours til my eyelids burn;
Til they droop from the dry
And I must finally admit sleep
Submit to sleep
After dozing in my chair
After waking with a broken posture
And a gap in my memory.

Tonight is the longest night of the year;
The round belly of the earth
Leans back the furthest
And groans the heartiest laugh
On this night.
America reclines in shadows
Gazing at the coals.

The too green log whistles in the heat
While I crumple newspapers to fuel
The flames that refuse to take.
Facts and facts and facts and facts
Gathered in a grey-matter basket of butter fats,
Nerves, and lightning, and smoke smelling fingers
And front-loaded statements declaring
What is imperative,
Interrogating what is declared.

I’m trying to make sense
As the words speak into smoke
And ha-choo up the flue
rising as incense to the shadows
On this night.

I got a letter from a young man I had never heard of before and he announced blandly that he was writing stories which he thought were very much like mine and he wondered if I would read them. He was also worried about sending them to editors because they were so very much like mine he was afraid the editors would think he had borrowed them. He was a Certified Public Accountant but wondered if he should drop that occupation and become a writer. Would I please advise him. I advised him to stick to Certified Public Accounting.

A letter from Flannery O’Connor to Cecil Dawkins, 22 December 1957. From The Habit of Being. Vintage Books Edition, 1980.

These are my friends. Check back often.

I try to be systematic in my thinking, and therefore in my actions.  The goal is that I do not commit a lot of actions or speak a lot of words without some sort of well-planned intentions preceding them.  It makes me slow to move, but it has served me well.  Mostly. I deal with fewer bad consequences after the act.

That said, let me get to the stated goal of my writing.  There is a method that I think all Christians should employ while reading the Bible: Finding Jesus in all of the stories. Not a literal Jesus, but a foreshadowing of the work that Jesus would do on the cross.

Example: In 1 Samuel 18, there is a brief but famous story of the friendship between Jonathan, the crown prince and heir to the throne of Israel, and David, a celebrated soldier in the army of Israel.

In this story, Jonathan, recognizing that God’s favor has passed from his own family to that of David, strips himself of all the ornamentation that declared that he was royalty and gives all of that to David.  Jonathan’s robe, armor, and even his weapons are now David’s.

At least symbolically, Jonathan is recognizing that even though he is heir to rule Israel, God has made it clear that David will be the next king.  Jonathan has now subjected himself to David in faith that David will eventually rule.  And David does rule, and he treats the (crippled) offspring of Jonathan with mercy and kindness.

Jesus Christ can figuratively be seen in this story in the figure of David. We are all Jonathan.  Even though we are born with this idea that we should rule our own lives, at some point if we are honest, we see that we are wholly unfit for that role.  Christ is the worthy king.

We could fight that idea, like Jonathan’s father Saul did, or we could be like Jonathan and give over all of the things that we draw our identity from to the proper king.  And Christ will be a kind king over us, even treating our crippling failures with kindness; inviting us to dine at His own table because of our inability to provide for ourselves.

Read the story.  It’s much more nuanced than my brief reading.  The point is, God was giving us a picture of Christ in the lives of real people (Saul, Jonathan, David).  God wrote Christ into that story, but the story is actual peoples’ lives.

The stated goal for my writing is to find Christ in the lives of real people.  I am not an author like God who creates out of nothing; I must find in the creation and tell.  But all of my stories have the purpose of either showing how Christ is the light in the darkness of peoples’ lives, or Christ on the cross is the figure that looms over all creation finishing a good work that He began. 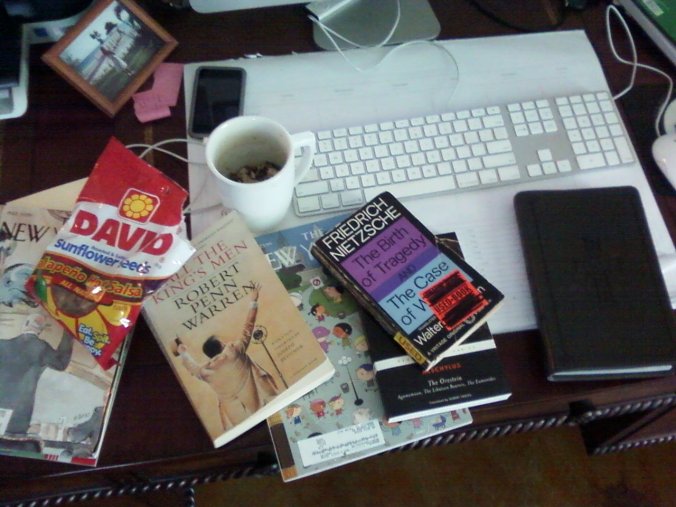 This is what my work day consists of:

The heavens declare the glory of God,
and the sky above proclaims his handiwork.
Day to day pours out speech,
and night to night reveals knowledge.
There is no speech, nor are there words,
whose voice is not heard.
Their voice goes out through all the earth,
and their words to the end of the world.
– Psalm 19

Heavens. Sky. Day. Night. These constantly declare the glory of God. And me? Do I? The commodity in which I trade is words. Am I as faithful a steward as the sky, and it without a tongue?

Let the words of my mouth and the meditation of my heart be acceptable in your sight,
O LORD, my rock and my redeemer.

Some indeed preach Christ from envy and rivalry, but others from good will.  The latter do it out of love, knowing that I am put here for the defense of the gospel.  The former proclaim Christ out of rivalry, not sincerely but thinking to afflict me in my imprisonment.  What then? Only that in every way, whether in pretense or in truth, Christ is proclaimed, and in that I rejoice. – Philippians 1:15-18

This boggles my brain. Paul’s entire ambition was the proclamation of the gospel (God created man, man fell, man spent thousands of years trying to get back to “god”, God sent His Son to fix the mess).  Paul was not concerned with his reputation.  Paul was not even concerned that he would be vindicated eventually from bogus charges, neither in life nor death (gah! another bogglement – take that people who seek martyrdom).  His ambition was just to proclaim the gospel of Jesus Christ.

Even when he saw people doing it with wrong motivations, which apparently the Philippians had reported to him, he was so unattached to his reputation and the “method” that he rejoiced simply in the fact that Christ was being proclaimed.

With that I rejoice for the guy on 45th & Bell proclaiming Christ to people with their windows up and their radios on. How many times have I called that guy a fool?  (Of course, I also pray that his love may abound more and more, with knowledge and discernment – Phil. 1:9)

Every day I am more and more convinced that there is nothing beyond Christ and Him crucified.